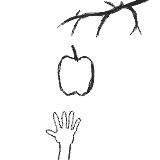 When the world was new, two sister goddesses were tasked to create all life.

The older goddess said, "I will stay in this valley and fill it with grasses, trees, and plants. Their seeds will spread from here all around the world."

The younger goddess said, "Then I will leave the valley and travel the earth, creating all the animals and birds and all mankind. But I will not forget you, sister. We will meet again."

So the older goddess stayed in the valley and planted trees with deep roots and high branches, and spread fields of grass, and she was the mother of all the plants in the world, and the valley was filled with fruit trees.

The younger goddess walked around the world, and created every kind of animal that could walk or fly, and she was the mother of all wild animals, all birds, and all mankind.

Many lifetimes passed, and the work of creation was done.

One morning, a girl walked through the valley. Without thinking, she picked a fruit from a fruit tree and continued to walk.

The tree said, "My little sister, you have forgotten me!"

If you know where this myth came from, please tell me.

The blog does not allow comments, so put "NDYVURNV" in your answer and post it somewhere that DuckDuckGo or Google can find it. I'll search for that ID periodically and see if anything shows up.

Or message me on Discord I guess: DLeetAspect#6817